Blame It On The Shame – The Complete Series (Boxset) 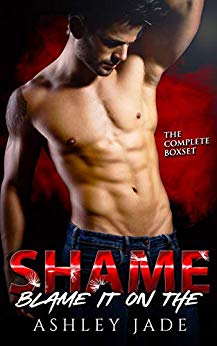 Blame It On The Shame – The Complete Series (Boxset)

Shame. It wounds us. It damages us.
Or, for the few poor souls out there like me…it defines us.
I’m the son of the devil, himself—the most feared mob boss who ever lived.
I was cursed from the moment I took my first breath.
I hate him…and I never wanted to become him.
And I sure as hell never, ever, wanted anything of his.

My name is Ricardo DeLuca. There are two things you need to know about me. The first—is that I’m in love with the girl who belongs to my father. The second—is that it turns out I am my father’s son after all.

My name is Lou-Lou, and you probably think I’m a bitch.
You would be right—because I am.
You think you know all there is to know about me because of the man I belong to.
What you don’t know—is my past, because I’ll never tell you.
What you don’t know is my shame.
Because if you did—you’d be worse off than dead.
You’d be broken.

There are two sides to every story…this is ours.

Warning: Due to strong language, some violence, explicit sexual content, and some dark elements, this book is not intended for readers under the age of 18.

Trigger Warning: This series contains elements of emotional, sexual, and physical cruelty. Any readers with sensitivity to the above topics should proceed with caution, and at their own risk.

***Also, please be advised, that Part 1 in this series (featuring a different couple) take place before any of the events in ‘Blame It on the Pain’ do. It is considered a ‘prequel’. ***

Ashley Jade is a lover of contemporary romance, erotica, new adult, dark romance, oxford commas, the em dash, peanut butter on her cookies, coffee, and anything thought provoking...except for math.
She's always read books growing up and after having a strange dream one night; she decided to just go for it and publish her first series.

Little did she know— she would end up falling head over heels in love with writing.

If she's not paying off student loan debt, working, or writing a novel—you can usually find her listening to music, hanging out with her readers online, and pondering the meaning of life.

Check out her amazon page and Facebook page for future novels.
She recently became hip and joined Twitter, so you can find her there, too.

She loves connecting with her readers—they make her world go round'.

Blame it on the Pain

Blame It On The Shame – Part 1